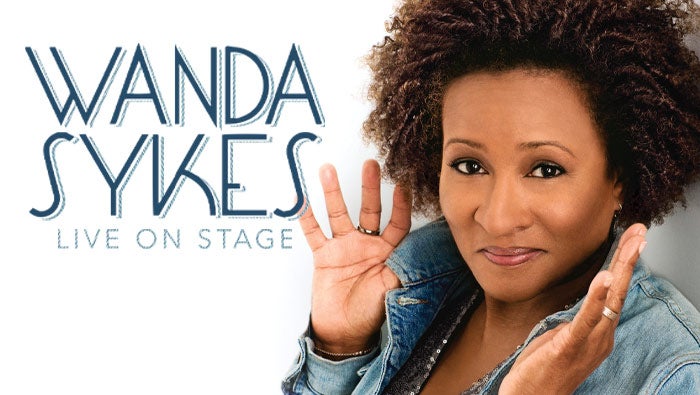 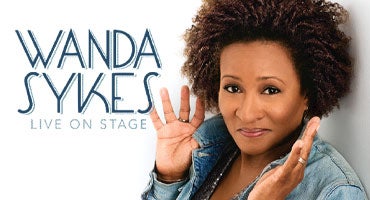 Due to an unforeseen scheduling conflict, we are canceling Wanda Sykes at Chrysler Hall in Norfolk, VA on May 11th with hopes of rescheduling in the fall. All refunds can be given at point of purchase.

Wanda Sykes has been called "one of the funniest stand-up comics" by her peers and ranks among Entertainment Weekly's 25 Funniest People in America. Her smart-witted stand up has sent her career in many different areas.

In 2012, Wanda joined forces with veteran producer Page Hurwitz to form Push It Productions, a production company dedicated to creating quality, comedy-based programming for network and cable television outlets. The company's diverse slate of projects includes sketch comedy, concerts, reality talk/variety, and competition formats. Their first set of specials; Herlarious aired in summer of 2013 and January 2014 on Own and was the recipient of a 2014 Gracie Award.  In just its first year, Push It has made a first look production deal with NBC, had a new series on OWN, and has shows currently in development with NickMom (Comedy Camp) and Comcast.  Push It Productions produced the 8th and 9th seasons of NBC’s Last Comic Standing. The second season of their show Talk Show The Game Show will premiere on TruTV this February and the second season of Face Value hosted by Deon Cole will return on BET in spring.

Her fourth comedy special shot What Happened…. Ms Sykes premiered in Fall 2016 on Epix.  Shot in Los Angeles, the special will focus on Wanda’s life, family, race and politics as she questions, “How Did I Get Here?” Her first HBO comedy special Wanda Sykes; Sick and Tired debuted in October 2006 and was nominated for a 2007 Primetime Emmy for ‘Outstanding Variety, Music or Comedy Special.’ It was taped in Seattle Washington and covered everything from racial profiling to gay marriage. She returned to HBO for her second stand up special I’ma Be Me.  This time it was taped at the Warner theatre in Washington DC where she tackled topics like the first black president, gay cruises, being a new mom and aging. The special was nominated for two 2010 Primetime Emmy awards: ‘Outstanding Variety, Music or Comedy Special’ and ‘Outstanding Writing for a Variety, Music or Comedy Special.’ Her first special Wanda Sykes: Tongue Untied premiered on Comedy Central in 2003.

Last summer she was seen in the Fox comedy Snatched with Amy Schumer and Goldie Hawn in Hawaii.  Sykes was also seen in the feature films Evan Almighty, the sequel to Bruce Almighty, in which she co-starred with Steve Carell; the New Line feature Monster-In-Law starring opposite Jane Fonda,  My Super Ex-Girlfriend, Pootie Tang, Nutty Professor 2; The Klumps, and Down to Earth.

Sykes has been seen on several television shows over the past few years. She can currently be seen on ABC’S Blackish, which she was nominated for a 2017 and 2018 Primetime Emmy Award for “Outstanding Guest Actress in a Comedy Series.” Other show include  Broad City, Showtime’s House of Lies; Amazon Prime’s  Alpha House created by Gary Trudeau about a group of Republican Senators who share the same DC rental house; HBO’s Curb Your Enthusiasm; she also spent five years on CBS's New Adventures of Old Christine. In 2010, she starred on her own late night talk show on FOX, The Wanda Sykes Show.  Other TV credits include Fox's Wanda at Large which she wrote, produced and starred in; Wanda Does It on Comedy Central and on Crank Yankers as the voice of Gladys Murphy.

She can be heard in many animated feature films and on TV. She was heard in Fox’s Ice Ace; Collision Course reprising her voice as ‘Granny’ from Ice Age: Continental Drift; in Dreamworks’ Over the Hedge and Paramount’s The Barnyard. On TV, she was heard on the children shows Vampira and Doc McStuffins.

Her first book titled Yeah, I Said It, published by Simon and Schuster, hit bookstores in September 2004. Yeah, I Said It is a hilarious collection of essays touching on life, family and current events.

She spent 5 years as part of the HBO's critically acclaimed Chris Rock Show. As a performer and writer on the show, she was nominated for three Primetime Emmy's and in 1999 won the Emmy for ‘Outstanding Writing for a Variety, Music or Comedy Special.’ In 2001, she won the American Comedy Award for ‘Outstanding Female Stand Up Comic.’ She won three more Emmy’s, in 2002, 2004 and 2005, for her work on Inside the NFL for ‘Outstanding Studio Show – Weekly.’

Wanda was born in Portsmouth, Virginia and raised in Maryland. She graduated with a Bachelor of Science degree from Hampton University. Her stand-up career began at a Coors Light Super talent Showcase in Washington, DC where she performed for the first time in front of a live audience.

In 2010 she won a GLAAD award for promoting a good image of equal rights for gays and lesbians.

This event will be a phone-free experience. Use of cellphones, smart watches, smart accessories, cameras or recording devices will not be permitted in the performance space.

Anyone seen using a cellphone during the performance will be escorted out of the venue. We appreciate your cooperation in creating a phone-free viewing experience.