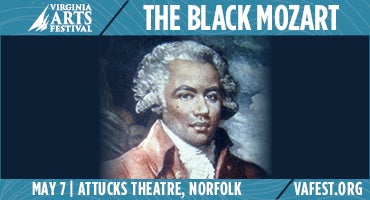 In conformance with Governor Ralph Northam’s statewide ban on events over 10 people, and due to the increasing threat of COVID-19, The Black Mozart performance scheduled to take place on May 7 at the Attucks Theatre has been canceled.

Refunds will be available at the original point of purchase. Tickets purchased through Ticketmaster will automatically be credited.

From Concert Theatre Works, this new work, premiered at Tanglewood 2019, tells “a slice of the wild historical story of composer and activist Chevalier de Saint-Georges, an 18th-century black aristocratic composer who…became a pioneer in nearly every field he touched” (Bay State Banner). Born in Guadalupe, he immigrated to France and became Marie Antoinette’s personal music teacher and Wolfgang Amadeus Mozart’s roommate, a darling of French society, a sought-after violinist, master fencer, soldier, and composer of some of the most beautiful and popular music of the era. Lost to history after the French Revolution upended much of the society in which Saint-Georges was celebrated, this amazing historical figure is brought to vivid life in this unique performance that combines actors and musicians.

Virginia Native, first-year NWS violinist fellow Brendon Elliott received his Bachelor’s from The Curtis Institute of Music in after studying with Pamela Frank, and the late Joseph Silverstein and completed his Master’s at The Juilliard School under Sylvia Rosenberg and Ronald Copes. He began his violin studies under his mother’s tutelage at the age of three and made his solo debut when he was 10 years old. Since then, he has soloed and played with many orchestras such as the Virginia Symphony, Richmond Symphony, Sphinx Virtuosi Chamber Orchestra, Orpheus Chamber Orchestra, Orchestra St. Luke’s, and Chineke! Orchestra.

Ambrosia Quartet is comprised of members of the Virginia Symphony: Simon Lapointe, Mayu Cipriano, Beverly Kane Baker, and Rebecca Gilmore. The quartet has been performing in the area since 2002, and is quartet-in-residence at The Academy of Music in Norfolk.