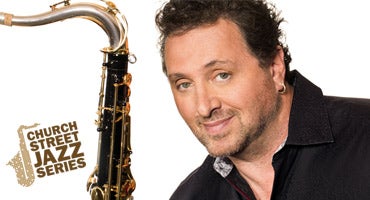 It was with the legendary Tower of Power that many first heard the saxophone virtuosity of Richard Elliot. Although he was born in Scotland and grew up in Los Angeles, where he started playing saxophone while in middle school, his five-year run with the Bay Area institution ToP during the 1980s was when Richard Elliot first came to prominence.

“I learned more about being a musician, about being a performer, about being a team player in a horn section, about how to make a statement when you step out and do a solo, from being with Tower of Power than from any other group or artist I ever worked with,” Elliot says, adding that it was “initially terrifying” to find himself among some of the most accomplished and highly respected musicians on the funk/R&B scene. In fact, he learned enough from working with them, Elliot says now, to know that he was ready to go off on his own when he did.

“Leaving Tower of Power was the hardest decision I ever made,” he says now, but great things were to follow almost immediately. By the late ’80s, Elliot had launched his solo career and was signed to Blue Note Records, where he worked with the legendary record executive Bruce Lundvall, an early champion of Elliot’s work. Since then, Elliot has released more than 20 albums as a leader, and has also polished his chops serving as a sideman for a considerable list of diverse giants, including Motown hit makers Smokey Robinson and the Temptations. One of Elliot’s favorite projects was the collaborative 2013 release Summer Horns, which found him teaming up with fellow sax-slingers Dave Koz, Gerald Albright and Mindi Abair—the album was nominated for a Grammy in the category of Best Pop Instrumental Album.

Throughout all of his music, Richard Elliot has always strived to achieve one certain goal. “Miles Davis said, ‘The hardest thing for a musician to do is sound like himself.’ That stuck with me,” Elliot says. “If you fixate on a single influence, you tend to sound like someone who’s trying to sound like that person. I never know if I’ve achieved that goal but on occasion I’ve had someone come up to me and say, ‘I heard a song on the radio and I knew it was you.’”

Richard Elliot and his band will energize the stage in the 3rd season of the “Church Street Jazz Series” Saturday, November 4th, 2017 at the Historic Attucks Theatre in Downtown Norfolk.