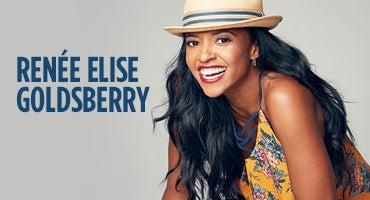 “She wowed the audience with her powerful vocals, intense positivity and boundless energy…[and] a meticulously curated selection of songs that shared one basic commonality: They uplifted, they empowered and they healed.”

This gifted actress and singer originated the role of Angelica Schuyler in the Broadway production of Hamilton, winning the Tony Award and Drama Desk Award – followed by a Grammy for the cast album and an Emmy for the Disney+ live stage recording of this record-breaking hit musical. Now Renée Elise Goldsberry brings her golden voice to the Virginia Arts Festival, singing Broadway hits including songs from The Lion King and Rent, American pop standards, and soul classics.