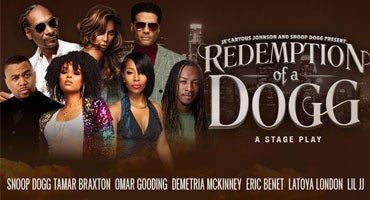 Redemption of a Dogg
presented by Je'Caryous Johnson & Snoop Dogg

Redemption Of A Dogg

is written, directed and produced by award-winning playwright Je’Caryous Johnson and chronicles a character built around the persona of entertainment icon Snoop Dogg - a multi-faceted character who is a gangsta rapper, family man and man of God. Redemption Of A Dogg examines the internal battle one man has between preserving his life-long legacy and losing the love of his life when he is faced with choosing fame and fortune over faith and family.

Redemption Of A Dogg is set against a backdrop of Snoop Dogg’s greatest hits, as well as songs from his recently released chart-topping Gospel album, Bible Of Love. The show will also include musical favorites and numbers from Tamar Braxton and Eric Benet, as well as original numbers penned from the hands of Johnson and the production’s musical director, Donnie “D-MAJOR” Boynton. In addition to the high energy, emotionally captivating musical numbers, the show will also have some high flying stunts, action sequences and surprise reveals that will leave audiences on the edge of their seats. There will also be SPECIAL GUESTS and VIP FRIENDS that will appear in cities across the tour.