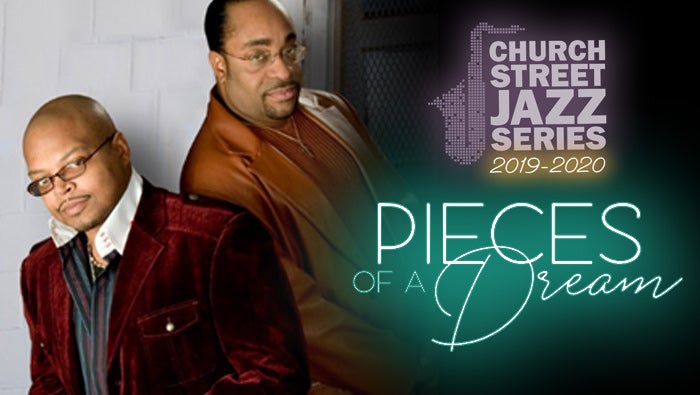 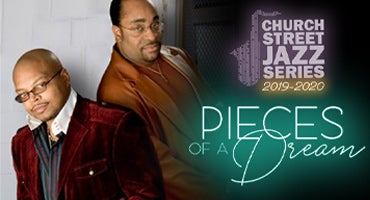 Dubbed the “Steely Dan of smooth jazz” by All About Jazz and praised by JazzTimes Magazine for their “consistently winning contemporary jazz,” Pieces of A Dream has been churning out chart-topping hits for four consecutive decades. Even the iconic Count Basie declared Pieces of A Dream “A tough act to follow!” Hailing from The City of Brotherly Love, the celebrated band has joined the ranks of some of Philadelphia’s most revered music-makers including Grover Washington, Jr., Patti LaBelle, The Roots, Jill Scott, John Coltrane, and Stanley Clarke. Throughout their illustrious career, childhood friends, pianist James Lloyd and drummer Curtis Harmon, have managed to stay true to their mission. “I don’t feel the vision for Pieces has changed at all,” explains Lloyd. “It’s a very simple one, to spread peace through our gift of music.” Curtis Harmon adds, “The band has changed a lot from 1976 to now. I mean just think about it - when we started, we were only 3, now we're 7!” Pieces of A Dream, whose name is inspired by Pittsburgh tenor titan Stanley Turrentine’s song “Pieces of Dreams,” remains one of the architects of contemporary jazz and has no plans of slowing down. “Our fans keep us alive and kicking,” declares Harmon.

On May 24, 2019, Shanachie Entertainment released On Another Note, Pieces of A Dream’s 24th recording. Pieces of A Dream has toured the world, sold over one million albums, and scored both Smooth Jazz and R&B radio hits along the way.

Not many groups manage to stay together for 42 years and amass a catalogue of 24 recordings. The story of Pieces of A Dream is remarkable considering James Lloyd and Curtis Harmon were 16 and 18 respectively when they released their first recording in 1981. Not long after that they hit the road performing in Grover Washington Jr.’s rhythm section and opening for him as Pieces of A Dream. “Mr. Magic” himself took Lloyd and Harmon under his wing and signed the band as the first group with his brand-new production company. Danny Harmon, Curtis’ father and a jazz musician himself, became their manager and had the guys listening to the Modern Jazz Quartet, Ahmad Jamal and Oscar Peterson as they developed their unique sound, blending their jazz roots with R&B, soul and funk. Pieces released three albums in quick succession, firmly establishing its place in the world of smooth jazz with the albums Pieces of a Dream (1981), We Are One (1982) and Imagine This (1983). Those albums include some of their biggest early hits, including “Warm Weather,” “Mount Airy Groove,” and “Fo Fi Fo.” Pieces of A Dream recorded their Shanachie debut, In the Moment, in 2013, followed by 2015’s All In and Just Funkin’ Around in 2017.

Blue Pyramid Productions is proud to have Pieces Of A Dream start off the New Year and kick off the 2020 leg of the Church Street Jazz Series' 5th Season!