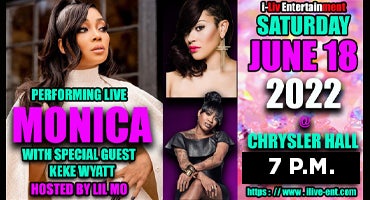 Monica started with her “discovery” at age twelve by Rowdy Records executive Dallas Austin at an Atlanta talent showcase. He brought her into New York to play for Arista Records President Clive Davis. Clive signed her to his Arista-distributed label and produced her first recordings at age thirteen. She was fourteen when the first of these, “Don’t Take It Personal (Just one of dem days)” hit #1 on the Billboard Hot R&B Singles chart (June 1995) and was certified RIAA platinum.”

Monica was still fourteen when her second single was released, “Before You Walk Out Of My Life,” which also went to the #1 R&B spot and took home the Platinum. This made her the youngest artist ever to have two consecutive #1 hits on the Billboard R&B chart. Her youth alone, in fact, puts Monica in rare company with the handful of legends whose #1 R&B debuts also happened while they were in puberty. Frankie Lymon (age 13), and “Little” Stevie Wonder (also 13).”

Monica commenced her first promotional tours the summer of 1995 in support of her Platinum-plus album, “Miss Thang,” which included those first two hits. By the time the third smash came out in mid-1996, “Why I Love You So Much/Ain’t Nobody,” Monica was fifteen, traveling with a full-time tutor, road manager, band, dancers, and a concert itinerary (with the likes of TLC, Bone Thugs-N-Harmony, Keith Sweat and others) that kept her busy for more than a year. Touring didn’t stop until sixteen-year-old Monica returned home to graduate on June 13, 1997, with a 4.0 GPA.

No one could have predicted how exciting and groundbreaking Monica’s career would be. The success of “Miss Thang” and her singles track record brought Monica nominations for an American Music Award as “Best New Artist,” a Billboard award as “Artist of the Year,” a Soul Train Lady of Soul award s “Best R&B Female Artist.”