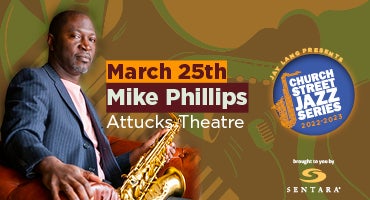 Contemporary jazz saxophonist Mike Phillips combines smooth, romantic riffs with a funky, hip-hop-influenced sound. Initially emerging as a sideman for Jill Scott in the 2000s, Phillips has played with a bevy of name artists, including Prince, Stevie Wonder, and Bootsy Collins. He has also distinguished himself with his own albums, including 2005's Uncommon Denominator and 2020's Pulling Off the Covers.

A native of Mount Vernon, New York, Phillips became interested in music at a young age and played several instruments before homing in on the saxophone as his main instrument. He began learning the jazz tradition, inspired by a mix of classic and more contemporary artists, including John Coltrane, Charlie Parker, Grover Washington, Jr., George Howard, and Art Porter. By the time he was 16, Phillips was already dedicated to pursuing a professional music career. In 1993, he made an early debut playing a gig at Wilson's Nightclub in New York, an opportunity that led to further work as a session and sideman for jazz, R&B, and hip-hop artists, including Groove Theory, Jon Lucien, and Jill Scott. He also joined Scott on tour in 2001. The following year, he released his debut album, You Have Reached Me, on Hidden Beach Recordings.

In 2005, Phillips released his sophomore album, Uncommon Denominator. More session work followed, including further collaborations with Scott, as well as Stevie Wonder, Tom Braxton, Prince, and Michael Jackson. In 2010, he returned to his solo work with MP3, and followed with studio appearances for Lin Rountree and Bootsy Collins. In 2020, Phillips delivered his fourth album as leader, Pulling Off the Covers.