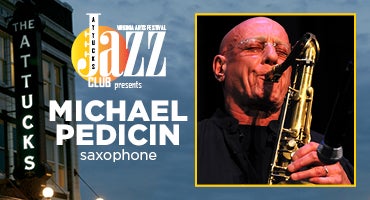 This Philadelphia-based player fell in love with jazz listening to his father, Mike Pedicin, a sought-after player who recorded prolifically with RCA Victor, 20th Century, ABC-Paramount and other major labels in the 1950s and ‘60s. Michael Pedicin’s own career has spanned decades of performance with such icons as Dave Brubeck, Frank Sinatra and Tony Bennett (as well as soul and rock stars The O’Jays, Stevie Wonder and David Bowie). A soulful player whose lyrical style invites reveries, Pedicin is also a licensed psychologist who believes passionately in the power of music to unite and heal.