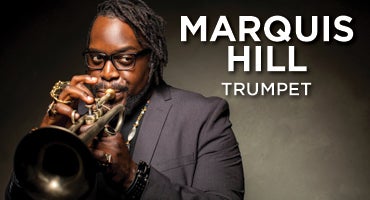 “Barely into his 30s, he’s already played a key role in expanding the sonic boundaries of jazz… infusing his personal brand of jazz with the musical influences of his youth, such as hip-hop, neo-soul and modern R&B. “

“one of the most promising jazz musicians to gain a national reputation in recent memory. He’s a remarkably gifted trumpeter, with a technical command that can evoke heroes like Donald Byrd and Freddie Hubbard .”

This groundbreaking musician, composer and bandleader has worked tirelessly to break down the barriers that divide musical genres. Contemporary and classic jazz, hip-hop, R&B, Chicago house, neo-soul—to Marquis Hill, they’re all essential elements of the profound African-American creative heritage he’s a part of. “I want to continue to blur the genre line between quote-unquote ‘jazz’ and hip-hop, because I’m a true believer that it is the same music”, he says. “Their roots come from the same tree; they just blossomed on different branches.”

Born in Chicago in 1987 and raised on the city’s culturally rich South Side, Hill began playing drums at age 4, before switching to trumpet in the 6th grade. During college he played gigs around Chicago, earning a reputation as a gifted trumpeter with a soulful, highly textured tone.  In November 2014, he won the Thelonious Monk Institute of Jazz competition and became a presence on the global scene virtually overnight; since then he has played with a who’s who of jazz that includes Dee Dee Bridgewater, Boney James, Kurt Elling, and Joe Lovano. Get an up-close look at the future of jazz when this groundbreaking performing plays the Attucks!