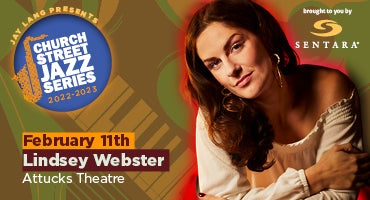 New York's Lindsey Webster is a chart-topping, award-winning vocalist and songwriter. She performs in a variety of styles from straight-ahead jazz and traditional pop to soulful smooth jazz and adult contemporary and crossover R&B. Between 2016 and 2018, she placed ten songs on the Smooth Jazz Songs charts, including a pair of number ones, making her the first jazz vocalist to top the chart since Sade. Furthermore, four of her albums, including 2016's Back to Your Heart and 2018's Love Inside, placed at numbers one and two, respectively, on the Contemporary Jazz Charts. 2020's A Woman Like Me went to number five. Reasons followed in September 2022.

A native of Woodstock, New York, Webster grew up playing cello, eventually shifting to singing while attending Fiorello H. LaGuardia School of Music & Art and Performing Arts in New York City. After meeting her collaborator and husband, pianist Keith Slattery, in 2009, she embarked on a fruitful solo career, releasing an independently produced eponymous album in 2013. Two years later, she returned with You Change on Atlanta Records.

In 2016, Webster released her third album, Back to Your Heart. Featured on the album was the single "Fool Me Once," which hit number one on Billboard's Smooth Jazz Songs chart. Webster's fourth solo album, Love Inside, appeared in 2018, and featured guest spots from trumpeter Rick Braun and guitarist Norman Brown. In 2020, Webster re-teamed with producer, keyboardist, and former husband Keith Slattery for A Woman Like Me. Her sidemen included bassist Nathan East, drummer Vinnie Colaiuta, and percussionist Luis Conte. Issued in March of 2020, the set peaked at number five on the Contemporary Jazz Albums chart. In January 2022, Webster issued the single "I Didn’t Mean It" featuring Brian Culbertson. She followed it with "Stay with Me" in July, featuring guest Randy Brecker on trumpet. The full-length Reasons followed in September.