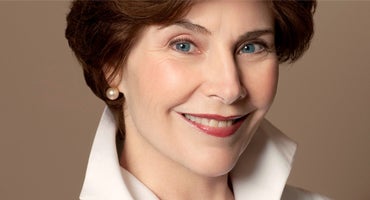 One of the most beloved and admired American First Ladies, for decades Laura Bush has championed key issues in the fields of education, health care, and human rights. She has traveled to more than seventy-six countries, including two historic solo trips to Afghanistan, and has launched groundbreaking education and healthcare programs in the U.S. and abroad. The author of the bestselling memoir, Spoken From The Heart, Mrs. Bush also founded both the Texas Book Festival and the National Book Festival in Washington D.C. Today, as the Chair of the Woman’s Initiative at the George W. Bush Institute, Mrs. Bush continues her work on global healthcare innovations, empowering women in emerging democracies, education reform, and supporting the men and women who have served in America’s military.

Recently, Mrs. Bush authored the foreword to We Are Afghan Women: Voices of Hope (March 2016). The book chronicles powerful stories of courageous women in Afghanistan and the risks they face on their journey to build peaceful communities in their country. Mrs. Bush is a leading voice for spreading freedom and promoting human rights across the globe. For more than a decade, she has led efforts through the U.S.-Afghan Women’s Council to protect the hard-earned rights of women in that country. As First Lady, she made three trips to Afghanistan and in 2001 she delivered the President’s weekly radio address—a first for a First Lady—to direct international attention to the Taliban’s oppression of women.

During her keynote address, Mrs. Bush will discuss her time as First Lady of the United States, her reflections on 9/11, her passion for education, and the work of the George W. Bush Institute. Mrs. Bush was born in Midland, Texas, to Harold and Jenna Welch. She holds a Bachelor of Science degree in education from Southern Methodist University and a master’s degree in library science from the University of Texas. She served as First Lady of Texas from 1995 to 2000.