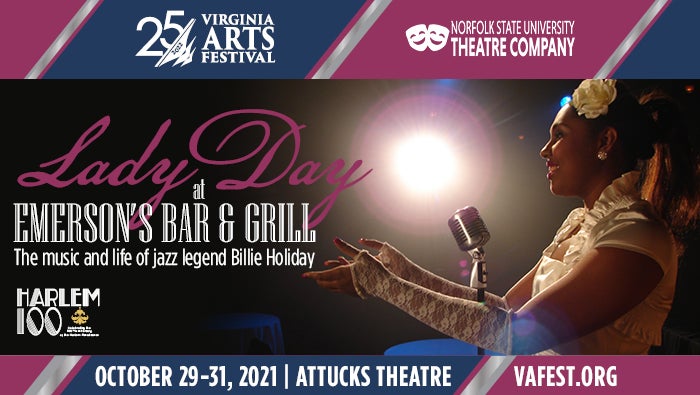 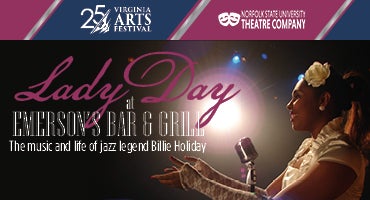 The Virginia Arts Festival presents Lady Day performance at the Attucks Theatre on October 29-31 requires all attendees to wear a face covering, regardless of vaccination status.

Additionally, any patron who is experiencing a fever or is not feeling well is encouraged to stay home and will be extended a flexible refund policy.

Lanie Robertson’s play with music entranced audiences on Broadway, on television, and in theatres across the country. Set in 1959 in a seedy bar in Philadelphia, we see a re-creation of one of Billie Holiday's last performances, given four months before her death. More than a dozen musical numbers – including such classics as “Strange Fruit,” “God Bless the Child,” “Ain’t Nobody’s Business If I Do” and more – are interlaced with salty, often humorous, reminiscences to project a riveting portrait of the lady and her music, and her lifelong struggle with racism, abuse, and addiction.

The new production is produced in collaboration with Norfolk State University Theatre Company, directed by Company Producing Artistic Director Anthony Mark Stockard, and will feature Ashley Bishop-Diggs as Lady Day. Bishop-Diggs has won acclaim for her stage portrayal of Billie Holiday and will be making her Norfolk debut. The new production will commemorate the 100th Anniversary of the Harlem Renaissance, a period associated with extraordinary intellectual, social and artistic expression for African Americans.

In a nod to history, the performances of Lady Day at Emerson’s Bar & Grill will take place in the 102-year-old Attucks Theatre, once a major stop on the circuit of great Black musical stars in its heyday in the 1930s, ‘40s and ‘50s. Billie Holiday herself graced the Attucks stage, as did Duke Ellington, Cab Calloway, Sarah Vaughan, and many others, including two of Holiday’s own musical idols, jazz icon Louis Armstrong and blues pioneer Bessie Smith. Now the story of Holiday’s life, and the haunting sounds of her singular music, will once again fill the Attucks.