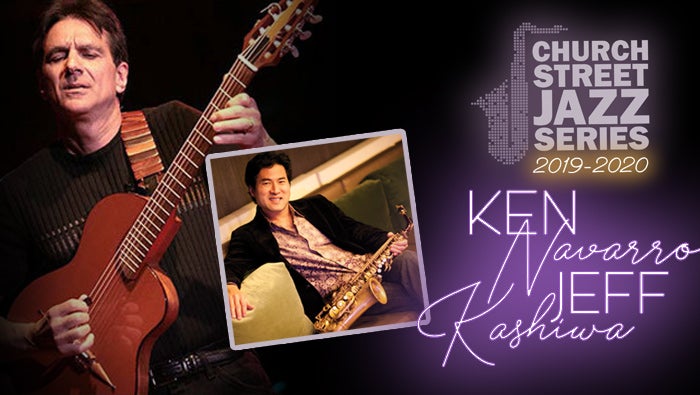 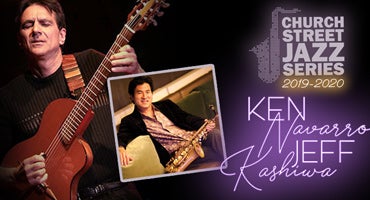 Save 15% with a season subscription!

Ken Navarro
Ken Navarro began his recording career in Los Angeles as a premier session guitarist, performer and composer, performing and recording with artists as diverse as Doc Severinsen, Nell Carter, John Patitucci, Eric Gale, Vicki Carr, Dave Koz, Ann Jillian and Alex Acuna. In 1990, Ken established his own musical identity with the release of his debut album, The River Flows. With each successive album, Ken has received increasing acclaim and recognition as a leading stylist in Contemporary Jazz.

Over the past 28 years, Ken has performed in every major US city and had numerous Top 5 hits on national radio. His music is distributed worldwide from Japan to Singapore, Hong Kong, Thailand, Britain, Australia, Chile, Brazil, Italy, Spain, France, Germany, the Netherlands, and even in China. Navarro's 2010 release Dreaming of Trains was pre-nominated for the 2011 Grammy awards in 2 categories and his 2014 album Ruby Lane spent four months in the Top 10 at contemporary/smooth jazz radio, iTunes and Amazon. His impressive discography of 24 top charting albums showcase his appeal to a wide range of listeners with inspiring compositions and superb guitar performances.

Ken's contribution to Contemporary and Mainstream Jazz goes beyond his personal artistry. Ken has produced successful albums for Narada/EMI recording artist Eric Darius as well as saxophonist Randy Villars and pianist Jay Rowe to name a few. As founder of Positive Music Records, Ken is responsible for launching and furthering the recording careers of saxophonist Brandon Fields, guitarists Grant Geissman, Thom Rotella, and Pat Kelley, and keyboardists Gregg Karukas, Jay Rowe, and Marcus Johnson. Ken's vision of a musician's record label has enhanced the genre with over 35 new artists and 95 releases.

Jeff Kashiwa
Seattle native, Jeff Kashiwa knew he was destined to be a musician following his junior high introduction to woodwinds. His instincts were correct. He became known as one of the most compelling young saxophonists in contemporary jazz during his first year with The Rippingtons.

Starting on the clarinet at age ten, it would be two years before Jeff switched to saxophone. Influenced early on by such smooth jazz progenitors as Chuck Mangione and Spyro Gyra, Kashiwa eventually moved to Boston to attend Berklee College of Music and developed an interest in straight-ahead jazz, a skill that often colors his live performances. His hard work paid off when he landed the second alto chair in Disney's All-American College Band.

Having established himself in the 1990’s as one of the most diverse saxmen in contemporary jazz during his decade long tenure with The Rippingtons, Kashiwa’s instincts led him to more dynamic endeavors through his solo career. Kashiwa now has nine albums released under his own name and has continued to record as a guest artist with many other artists as well.

In 2006, Jeff reunited with The Rippingtons for their 20th Anniversary Tour and continues to record and tour with the group as often as his busy schedule will allow. Kashiwa has expanded his career to include the realm of music education, teaching various courses through the music program at Shoreline Community College in Seattle.His brand-new album Let It Ride features a host of great musicians in the world of Contemporary Jazz: Russ Freeman, David Benoit, Chuck Loeb and Tom Schuman of Spyro Gyra. Let It Ride made it to the Top 4 Best Sellers in Smooth Jazz on Amazon.com.