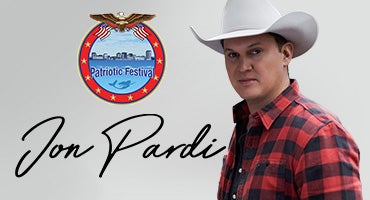 The 2022 Patriotic Festival is proud to present country music singer, songwriter, and record producer Jon Pardi at Scope Arena! Known for his neo-traditional style, Pardi has released three studio albums, one extended play, and eleven singles, ten of which have charted on the Hot Country Songs and Country Airplay charts.

As is his artistry. Pardi wrote a bulk of the songs on California Sunrise, but he was more than willing to consider material from other Nashville songwriters. He discovered a bevy of tunes that had been overlooked in the rush for synthetic productions from some of his contemporaries. He used mostly the same band that backed him on the first album, and they were invested in both the music and Pardi.

Ushered into the world on the same label that launched Buck Owens and Merle Haggard, Pardi has found a whole chain of believers in his mission: the dedicated band behind him, the foot-stomping fans with cold beers at the foot of the stage, and a label that knows Pardi’s “throwback” sound is really made for these times. (Courtesy JonPardi.com)