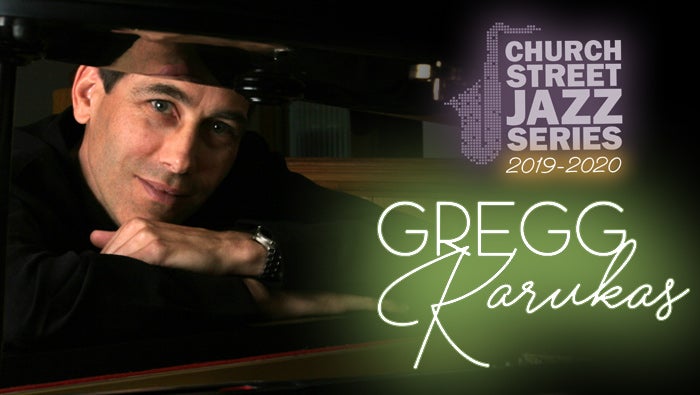 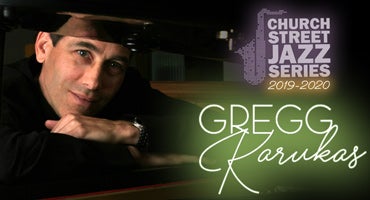 At the request of the artist, the Gregg Karukas performance scheduled to take place on Saturday, March 14, has been postponed. A new performance date will be announced shortly.

Previously purchased tickets will be honored at the new date. Refunds will be available at the original point of purchase. Tickets purchased through Ticketmaster will automatically be credited.

Blue Pyramid Productions LLC & The Church Street Jazz Series wholeheartedly understands and appreciates  Mr. Karukas's health concerns for himself, our region and you, the supporters and fans of his music and performances. After notification by phone, he issued the following statement clarifying the reasoning behind his decision 11:28pm Wednesday Evening (3/11) on his Facebook Page.

Grammy winning keyboardist/composer Gregg Karukas is one of urban contemporary jazz's most versatile and acclaimed artists, and has been for over 25 years. Gregg won the Grammy for producing, composing, arranging, playing all keyboards, and engineering Echoes of Love, which won Best New Age Album at the 55th Grammy Awards in February 2013. He has had a diverse career in music with a long list of credits in all media. Gregg arranged and played all keyboards on the theme songs to Disney's Ducktales and Chip and Dale's Rescue Rangers and is a veteran of many television and film music sessions, (Cheers, Stand and Deliver, Life Goes On, Mr. Wrong).

As a solo artist, Gregg's 11 original albums have garnered consistently solid reviews for his signature piano touch, pristine production, and melodies that are both soulful and sophisticated. Always in demand as a musical director and keyboardist, Gregg has received multiple Best Keyboardist nominations at the Oasis and National Smooth Jazz Awards. His best-known songs, "Elegant Nights” (#1), "Rio Drive" (#1), "Girl in the Red Dress" (#4), "Nightshift" (#1), and Jessy J.'s #1 hit "Tropical Rain" showcase Gregg's funky, melodic compositional style familiar to his fans.

"People say my music sounds romantic and uplifting - and I look so happy on stage.," he says, "It's totally true. For me, the best music comes out of an inner feeling of either intense happiness or sadness. I always try to stay faithful to that original inspiration, because that is where the true 'sound of emotion' comes from." Gregg's contagious smile and positive attitude shows in his concerts, as he has emerged over the years as one of the genre's most dynamic and inspiring live performers since he first took the stage in 1987 with the original Rippingtons and toured through the years with superstars Boney James, Sergio Mendes, and Larry Carlton.

Gregg enjoyed the rare accomplishment of two consecutive #1 hit songs and THREE TOP 5 chart hits from his stellar 2014 release Soul Secrets. His second single, "Rio Drive", was named the #1 most played song of 2015 on Alan Kepler's Smooth Jazz Top 20 (#2 on Billboard's 2015 airplay chart)! It follows "Elegant Nights" which hit the top of the charts in January of 2015. "Only You", the third single dedicated to Gregg's wife Yvonne, hit #2 on Smooth Jazz Top 20 in July 2016. Gregg has taken his ever-present smile and energetic, show around the world to Java Jazz in Jakarta, Manila, Jazztrax Catalina Jazz Festival, and The Mallorca (Spain) Smooth Jazz Festival.

Blue Pyramid Productions is proud to have Gregg return to Norfolk in concert at The Attucks Theatre in celebration of the 5th season of the Church Street Jazz Series.