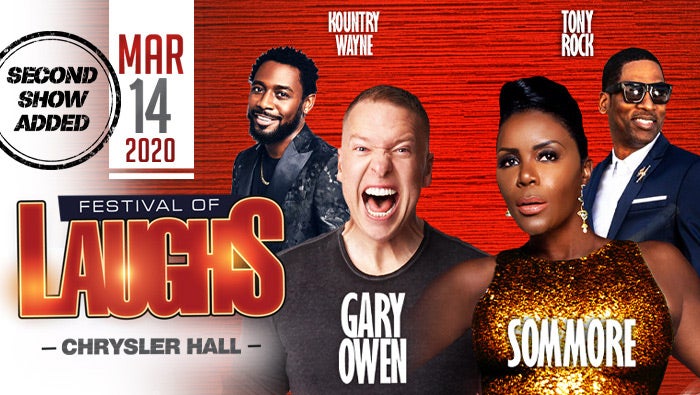 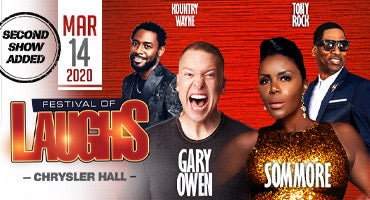 Comedian heavyweights Sommore, Gary Owen, Tony Rock and Kountry Wayne are set to bring The Festival of Laughs to Chrysler Hall on March 14 for TWO SHOWS - 7pm and 10pm!

Each year, the Festival of Laughs unites some of the most popular names in comedy on stage. The highly celebrated entertainers will bring down the house with their sharp wit, unbridled humor and hysterical storytelling for a night fans won’t want to miss!

ABOUT SOMMORE:
In her more than 20-year career, award-winning comedienne of “Chandelier Status,” Sommore, has become a trailblazer for women in the comedy business as one of the most successful comedians in the U.S. and abroad. Sommore has been featured in a number of hit films including "Soul Plane," "Something New" and "Friday After Next." Her all-new self-produced comedy special, "A Queen With No Spades" recently premiered on Showtime.

ABOUT GARY OWEN:
Having performed to sold-out audiences in all the major comedy clubs and theatres across the country, Gary Owen is one of America’s most beloved comedians, having been proclaimed by Ebony magazine as Black America’s “Favorite White Comedian.” Audiences can see Owen in his most recent comedy special, “I Got My Associates” currently on Showtime.  Last year, Owen starred in his own docuseries “The Gary Owen Show” on BET, which chronicled his dynamic and interracial family life with his wife and children in small-town Ohio. Film credits include “Meet The Blacks,” “Think Like A Man,” “Think Like A Man Too,” “Ride Along,” “Little Man,” “Daddy Day Care,” and “College.”

ABOUT TONY ROCK:
Comedian, Actor, Producer Tony Rock is the hardest working man in show business. Rock has proven to be one of television's best hosts having played the role of ringleader on HBO’s weekly stand-up comedy series "All Def Comedy," NBA TV's "The Warm Up," along with BET’s "Black Card Revoked" and "Apollo Live," all while co-starring in his first primetime network series, CBS' "Living Biblically."

ABOUT KOUNTRY WAYNE:
Raw, real and wickedly hilarious, “Kountry” Wayne Colley’s 2500 (and counting!) microformat digital videos have catapulted him from life in small town Georgia to mega social media superstar and comedy sensation, selling out clubs and theaters across America. Since his first Facebook post in October 2014 went viral, the charismatic comic has amassed several million followers across Facebook and Instagram. Wayne is currently on his 2019 “Drip Tour,” drawing SRO crowds.