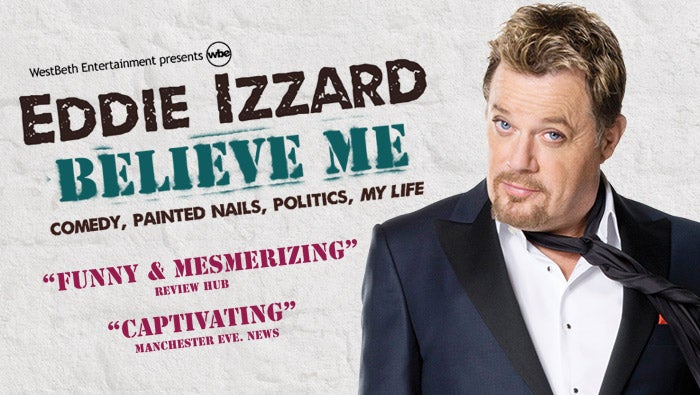 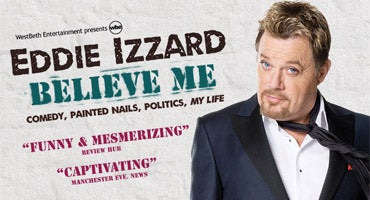 “Eddie Izzard has done something which would be a terrifying concept for many performers. He has stripped away the barriers and given a candid account of his life so far. The result is an expectantly funny yet emotionally charged evening.” – The Reviews Hub

“Full of pathos, honesty and boomerang hippos, Believe Me is a wonderful show which gives a fascinating glimpse into what drives this remarkable man.” – Manchester Evening News

Comedian Eddie Izzard brings his new show, Eddie Izzard: Believe Me Tour to Chrysler Hall!  This funny and emotional show reveals the man behind the stand-up with all of the fascination with the ridiculous fans expect from an Eddie Izzard performance.

Izzard’s first book, Believe Me, was just chosen by Bill Gates as one of the “5 Amazing Books I Read This Year."  Released on June 13, 2017, Believe Me is a New York Times Best Seller.  Writing with the same candor and insight evident in his comedy, he reflects on a childhood marked by the loss of his mother, boarding school, and alternative sexuality, as well as a life in comedy, film, politics, running, and philanthropy. Honest and generous, Izzard’s Believe Me is an inspired account of a very singular life thus far.

Izzard can currently be seen co-starring opposite Judi Dench as her son Bertie, the King in waiting in the critically acclaimed film, Victoria and Abdul.  The film premiered at The Venice Film Festival on September 3, 2017 and opened to the public on September 22, 2017.

Over the course of a thirty-year career, Eddie Izzard has proved himself to be a creative chameleon, inhabiting the stage and film and television screen with an unbelievable fervor. Born in Yemen and raised in Northern Ireland, Wales, and England, he lost his mother at the age of six and that has affected the rest of his life. In his teens, he dropped out of university and took to the streets of London as part of a comedy double act.  When his partner went on vacation, Izzard kept busy by inventing a one-man escape act, and thus a solo career was ignited. As a stand-up comedian, Izzard has captivated audiences with his surreal, stream-of-consciousness comedy—lines such as “Cake or Death?” “Death Star Canteen,” and “Do You Have a Flag?” have the status of great rock lyrics. As a self-proclaimed “action transvestite,” Izzard broke a mold performing in makeup and heels, and has become as famous for his “total clothing” rights as he has for his art. In Believe Me, he recounts the dizzying rise he made from the streets of London to West End theaters, to Wembley Arena, Madison Square Garden, and the Hollywood Bowl.

Izzard is arguably one of today's top comedians. He is touring his Force Majeure show—so far in more than forty countries worldwide and in four languages: English, French, German, and Spanish.  With his brand of keenly intelligent humor that ranges from world history to historical politics, sexual politics, mad ancient kings, and chickens with guns, he has built an extraordinary fan base that transcends age, gender, and race.