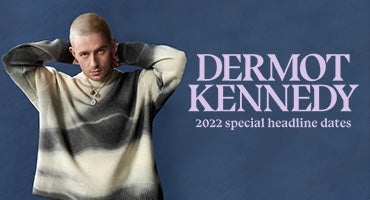 Acclaimed, platinum-selling singer-songwriter Dermot Kennedy has announced special headline dates - a limited tour engagement in select U.S. cities. The dates see his long-awaited return to the concert stage, and his only headline North American dates in 2022. The concert dates are announced on the eve of Dermot’s new single release ‘SOMETHING TO SOMEONE’, out on Island Records UK / Interscope on May 5th. ‘Something to Someone’ is Dermot’s first new music since the hit ‘Better Days’.

With nearly 4 billion streams amassed across platforms, Dermot Kennedy has the best-selling debut album in his native Ireland of this millennium. Without Fear, Dermot’s impassioned debut, has sold over 1.5 million copies worldwide, making him a platinum-selling artist in over 12 countries. Notably, both of his singles, “Outnumbered” and the Meduza collaboration “Paradise,” were certified Gold in 2021, with “Paradise” streaming over 500 million times, while “Power Over Me” was also recently certified Gold.