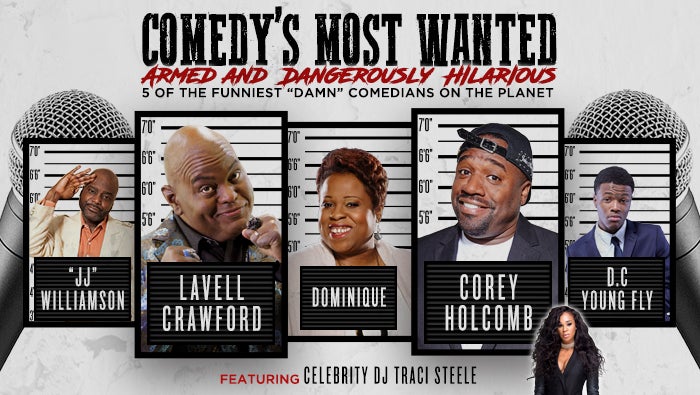 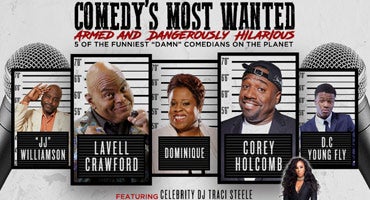 AEG Presents, Peachez and The Silent Partner have joined forces to bring together five of the funniest comedians on the planet for the "Comedy's Most Wanted Tour."  These armed and dangerously hilarious comedians promise to deliver non-stop laughs while DJ Traci Steele keeps the entertainment going between sets by spinning all the greatest hits past and present.

Corey Holcomb
Going from hanging in the hood to performing comedy on Jay Leno’s “Tonight Show,” not to mention the privilege of afterward being invited to take a seat on the “couch” which not many comics are asked to do, has been a long and fulfilling journey. Corey’s film and television credits include the films “Think Like A Man Too,” “Wedding Ringer,” independent film “Who’s Watching The Kids,” MTV2’s “Wild ‘N Out,” MTV’s “Wild ‘N Out,” NBC’s “Last Comic Standing,” 20th Century Fox’s “Like Mike,” a recurring role on UPN’s “Half & Half,” NBC’s “The Tonight Show,” BET’s “Comic View,” Fox’s “Mad TV,” Comedy Central’s “Premium Blend,” HBO’s “Def Comedy Jam,” “It’s Showtime at the Apollo,” Showtime’s “Shaq’s All Star Comedy Jam,” Tyler Perry’s “House of Pain,” TV Ones “Rickey Smiley Show,” and plays recurring character Robert Tubbs on Fox’s “The Cleveland Show”! He has appeared in three comedy specials of his own, Corey Holcomb: “The Problem Is You,” Comedy Central Presents: “Corey Holcomb,” and Corey Holcomb: “Your Way Ain’t Working.”

Dominique
Dominique is the new face of funny in America. She’s created laughs on stages all across the world, including nationally syndicated “Tom Joyner Morning Show,” NBC’s “Last Comic Standing,” HBO’s Def Comedy Jam, Comedy Central’s “Chappelle’s Show,” O.W.N.’s “Herlarious”, and the hit television series “Black Jesus,” now airing on Adult Swim. Dominique became a fixture of New York’s comedy scene, performing alongside comics like Chris Rock and Dave Chappelle. During a chance encounter at a small comedy club, Dominique impressed “30 Rock” and “SNL” star Tracy Morgan, who immediately made Dominique the opening act for his “Caroline’s on Broadway” show. Since then, Dominique has wowed audiences from London to LA, and all points between. Fans turn to Dominique for funny, informative, and memorable stories and guaranteed laughs.

J.J. Williamson
Hard work and enthusiasm has promoted Jeremiah (J.J.) Williamson into a very successful start in the entertainment industry. J.J. has proven that he is one of the most sought after rising stars in the industry today, through his tenacity and willingness to perpetuate his talent to its highest level of excellence. He has worked with comedy giants such as Chris Tucker, D.L. Hughley, Rickey Smiley and Bruce Bruce. He has electrified stages across the country with Cedric “The Entertainer” during the summer tours. J.J. has graced the stages and entertained thousands at numerous popular venues such as the Los Angeles and Miami Improv, the Chicago House of Blues, Caroline’s of New York, the Comedy Store of Los Angeles, the Universal Amphitheater of Los Angeles and the Palace Theaters in Cleveland and Columbus, Ohio. J.J. has performed via the television circuit on “Showtime at the Apollo” and BET’s “Comic View.” Jeremiah can currently be seen in the Comedy Central show, “Russell Simmons Presents Stand-Up at the El Rey.”

DJ Traci Steele
Traci Steele is a TV/Radio personality, entrepreneur, fashionista, and renowned celebrity DJ. Steele was born and raised in the Bronx of New York City with strong Jamaican and African-American roots. With an honorable career in the United States Air Force, Steele gained the confidence needed as a woman that led her to becoming one of the most talented and influential DJ's in the 21st Century. Steele can now be heard every Sunday from 2pm - 6pm on Atlanta's Hottest Hip Hop Station 107.9FM. Steele's notoriety garnered a touring opportunity with some of the most elitist names in the music industry: Musiq Soulchild, Jazmine Sullivan, and Ne-Yo. With a unique personality and a witty sense of humor, Steele's charisma transcended into numerous television appearances such as: Bounce TV's Show (Off The Chain); BET's Show (106 & Park); VH1's Show (Love & Hip Hop - Season 2), ABC’s Good Morning America. You can catch her now as a Co Host to the legendary Donnie Simpson for their new late night talk show, Donnie After Dark airing on TV One.