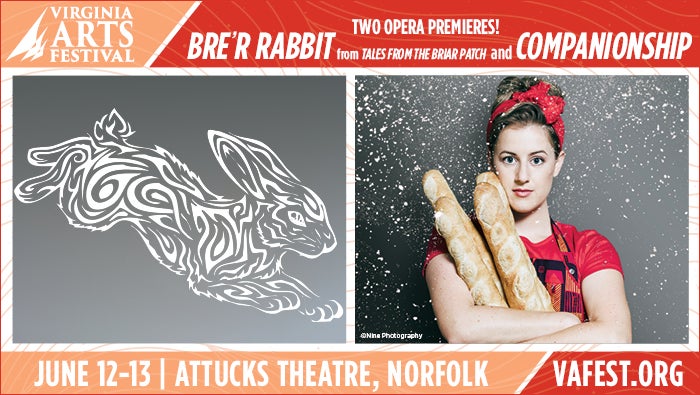 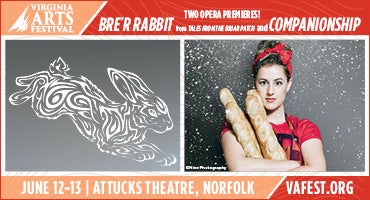 In conformance with Governor Ralph Northam’s statewide ban on events over 10 people, and due to the increasing threat of COVID-19, the Bre'r Rabbit/Companionship performance scheduled to take place June 12 - 13 at the Attucks Theatre has been canceled.

Refunds will be available at the original point of purchase. Tickets purchased through Ticketmaster will automatically be credited.

Bre’r Rabbit (from Tales From the Briar Patch) from composer Nkeiru Okoye and librettist Carman Moore, reboots a classic tale in a work infused with jazz and gospel stylings, while paying tribute to the African tradition of storytelling.  Madame Partridge and her sassy sisters, Sparrow and Robin, retell the antics of Bre’r Rabbit and his nemesis, Bre’r Fox, creating an enchanting world in song. The opera is scored for five singers and an ensemble of ten instruments, including a washboard. The world-premiere performance will be directed by Anthony Stockard, Producing Artistic Director of the Norfolk State University Theatre Company.

Companionship, by composer/librettist Rachel J. Peters, sings the story of an aspiring baker who finally reaches the end of her obsessive quest to bake the perfect baguette when the 207,345th one suddenly comes to life. Adapted from the short story by Arthur Phillips, this darkly witty work mirrors our contemporary world, where what we consume becomes all-consuming. The opera features seven soloists, a children’s chorus and an ensemble of eleven instruments, with stage direction by Bob McGrath, Co-Founder and Director of Ridge Theater in New York.

The double-bill of opera performances will be conducted by the Duffy Institute’s long-time Music Director Alan Johnson, Program/Music Director of the University of Miami’s Frost Opera Theater.

The operas were developed through the Festival’s John Duffy Institute for New Opera.  The Duffy Institute is funded by the Andrew W. Mellon Foundation, the Friedrich Ludwig Diehn Fund of the Hampton Roads Community Foundation and the Aaron Copland Fund for Music, and receives the support of Old Dominion University’s F. Ludwig Diehn Composers Room.

Developed in association with The American Opera Project (AOP).  Bre’r Rabbit commissioned by AOP through the support of the New York State Council on the Arts (NYSCA) and developed with funds from OPERA America’s Discovery Grant for Female Composers supported by the Virginia B. Toulmin Foundation. Companionship developed in AOP’s Composers & the Voice program with support from The Andrew W. Mellon Foundation.