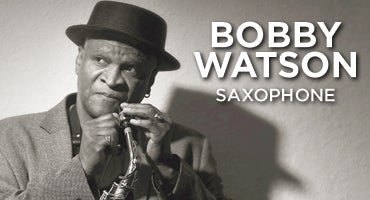 “His alto…exhibits a passion, playfulness and freedom that's utterly disarming at times. Watson's gift for melody is key to his appeal….”

“Bobby Watson plays a richly modulated, soulful but virtuosic alto sax…. A seasoned "heavy" on the alto sax whose playing echoes saxophone greats from Phil Woods to Cannonball Adderley, as well as tenor titans Dexter Gordon to Sonny Rollins, yet with his own incomparable virtuosity.“

Saxophonist, composer, arranger and educator Bobby Watson, raised in jazz-rich Kansas City, made a name for himself as the musical director of Art Blakey’s Jazz Messengers, launching a career that kept his phone ringing for decades and his bags packed for gigs across the map. He has played with the legends, including Max Roach, Louis Hayes, Wynton Marsalis, Joe Williams, Dianne Reeves, Lou Rawls, Betty Carter and many more. His quintet Horizon became legendary as well, defining the jazz sound of the ‘80s and ‘90s and releasing some of the Blue Note label’s best-loved recordings. Watson’s classic 1986 release “Love Remains (Red)” has long been recognized by the Penguin Guide to Jazz as part of the “core collection” any jazz aficionado should own. His original compositions include music for the soundtrack of Robert DeNiro’s film A Bronx Tale, and a number of classics that have been interpreted by many of his fellow musicians, including “Time Will Tell,” “In Case You Missed It,” and “Wheel Within a Wheel.” Hear this lion of jazz at the Attucks!