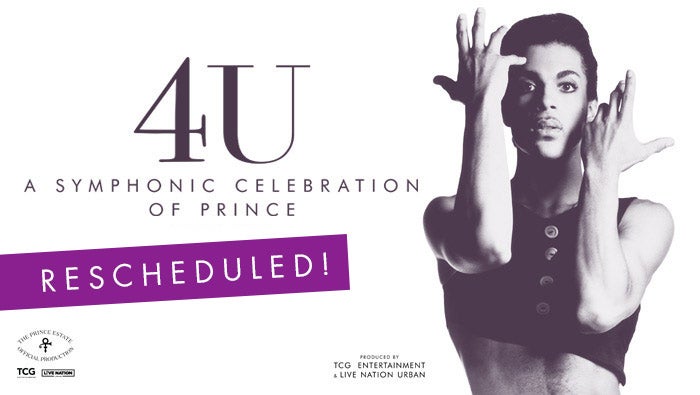 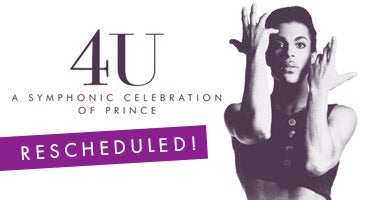 RESCHEDULED: 4U: A Symphonic Celebration of Prince

The 4U: A Symphonic Celebration of Prince performance, originally scheduled to take place on Tuesday, September 11 at Chrysler Hall, has been rescheduled for Sunday, September 23rd at 7:30 p.m. at Chrysler Hall. Tickets purchased for the original September 11 date will be honored for the same seats at the rescheduled show. Tickets for the September 23 performance are on sale now at the Scope Arena Box Office, all Ticketmaster outlets or by phone at 1-800-745-3000.

April 21, 2016 will live in infamy as the day we lost a genius, an icon, a legend. Prince is widely regarded as one of the best musicians ever to live, and one of the greatest showmen of all time. His music makes up the soundtracks of our lives- from the parties of our youth to our weddings; and we share his music with our children who repeat the cycle. Great music lives on forever, and, it’s with this in mind that we introduce “4U: A Symphonic Celebration of Prince.”

The first and only estate-approved Prince celebration, 4U will present the music of Prince like never before, with a live orchestra. Throughout the course of the evening Prince’s extensive musical catalog will be represented, we’ll hear his greatest hits as well as some of his lesser known gems in this musical celebration. Questlove, an avid Prince fan, has helped curate the music and arrangements that will be played by the symphony.

“Prince was singular in his music. He was his own genre.” - Ahmir “Questlove” Thompson/Rolling Stone