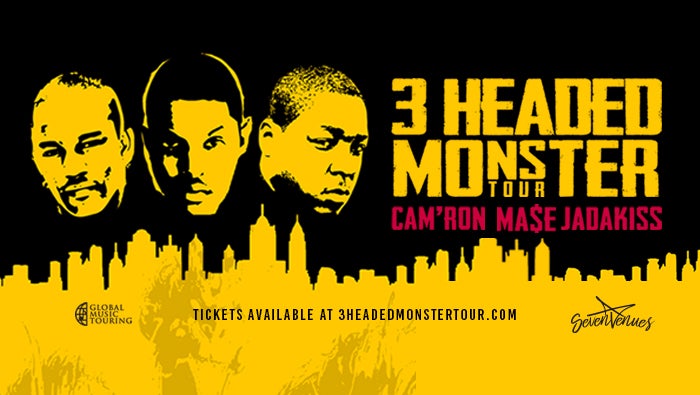 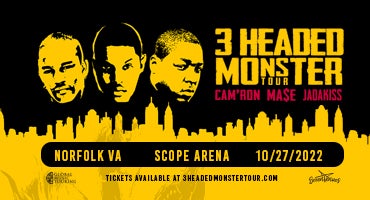 The 3 Headed Monster Tour featuring MA$E, Cam’Ron and Jadakiss brings an epic night with some of the most iconic hip hop artists of the late 90’s, for one night only!

Ma$e took the late 90’s by storm with a total of five platinum singles, five US Rap No. 1 singles, and six Billboard Hot 100 top 10 singles, including "Can't Nobody Hold Me Down", "Mo Money Mo Problems", "Been Around the World", "Feel So Good", What You Want" and "Lookin' at Me". Both "Can't Nobody Hold Me Down" and "Mo Money Mo Problems" reached No. 1 on the Billboard Hot 100. Mase's 1997 album Harlem World was certified quadruple platinum by the RIAA.[5] His other two albums, Double Up (1999) and Welcome Back (2004), have been certified gold.

Cam’ron, beginning his career in the mid-1990s, was one of the true pioneers of hip hop with top hits including "Oh Boy" and "Hey Ma" and has recorded and produced several multi-platinum albums. Aside from his solo career, Cam'ron is the leader of the Diplomats (also known as Dipset), a group he formed in 1997 with his childhood friend Jim Jones and his cousin Freekey Zekey. He was also one half of the duo U.N. (Us Now), and a founding member of the Children of the Corn before they disbanded in 1997.

Jadakiss began his career in the 1990s as a member of the rap trio The Lox, managed by Ruff Ryders and signed with Bad Boy. His debut solo album, Kiss Tha Game Goodbye, was released in 2001. He has released three more solo studio albums, another album with the Lox, and an album with fellow rapper Fabolous. In 2007, Jadakiss signed with Jay-Z's Roc-A-Fella and Def Jam, which, with Ruff Ryders, co-released his 2009 album The Last Kiss. Altogether, he has released five studio albums, most recently Ignatius in 2020.