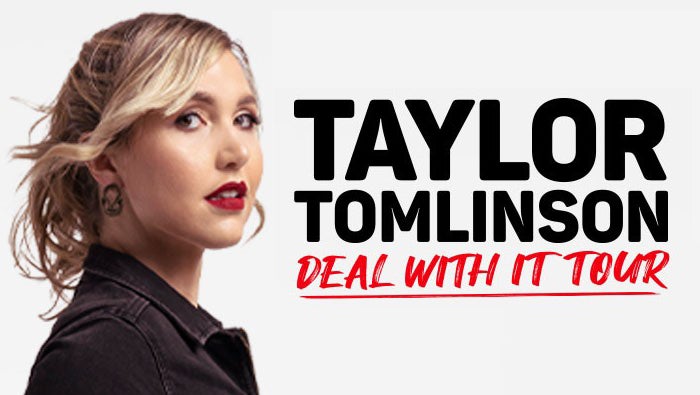 Taylor Tomlinson
Deal With It Tour

Comedienne Taylor Tomlinson’s witty perspective on navigating adulthood has undertones of wisdom, typically earned with age. With open arms, Forbes’ welcomed Tomlinson to the 2021 ’30 Under 30’ class. In March 2020, Taylor Tomlinson’s voice rose from the pandemic silence, with a first-ever, hour-long Netflix Special ‘Quarter-Life Crisis.’ The special earned unanimous praise, accompanied by nods from the Washington Post who deemed it, “your favorite quarantine-watch.” Newsweek doubled down, cosigning that Tomlinson is “undeniably hilarious” and “wise beyond her years.”

With only three weeks into the ‘Deal With It’ Tour, Tomlinson has set the bar high with seventeen sold-out shows. She continues her cross-country trek with dates in the United States and Canada — with stops in New York City, San Diego, Nashville and more.

Taylor Tomlinson has stamped her name in her-story as one of the youngest comedians to headline theatres, joining the ranks of Eddie Murphy and Dave Chapelle. She notes that “This hour is definitely darker and more personal — ‘Quarter Life Crisis’ was about being frustrated with where (I’m) at in life and this new material is about taking a hard look at who (I) am and how (I) got that way.”

She’s spent much of 2019 filling comedy clubs with belly laughs across the country. During a pandemic where people search for reasons to smile, she began the 2019-2020 ‘The Codependent Tour’ in seven cities with nineteen shows. It was her first co-headlining tour with fellow comedienne, Whitney Cummings. The socially distanced, outdoor performances kicked off in Philadelphia with five shows; shortly ushering in fourteen more shows — in six different cities.

Tomlinson’s Netflix Special is decades-long proof of life experience, writing and performing. The set was a masterful display of comedic timing, crowd synchronicity, and smarts. Tomlinson’s special went on to be named ‘Best of 2020’ by New York Times, Decider, Paste; and Vulture’s “comedian you should and will know!”

Performances on The Tonight Show Starring Jimmy Fallon; CONAN; Comedy Central's Adam Devine's House Party; and Netflix’s The Comedy Lineup — as well as a top-ten finish in Season 9 of NBC’s Last Comic Standing, have all endeared the woman Mashable calls "whip-smart and spectacularly cynical," to a global audience. Variety Magazine named her one of the ‘Top 10 Comics to Watch’ at the Just for Laughs Festival.