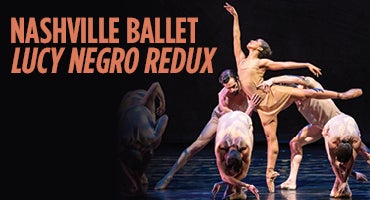 The Virginia Arts Festival presents Nashville Ballet: Lucy Negro Redux performance is no longer requiring patrons to wear a mask. Nashville Ballet's production of Lucy Negro Redux is based on the book by Nashville poet Caroline Randall Williams and contains sexually explicit language and references. While children under the age of 18 are not prohibited from attending this performance, it is important that parents and guardians be aware of the nature of the work prior to attending. We strongly encourage that anyone under the age of 18 be accompanied by a parent and/or guardian.

Based on the book by Caroline Randall Williams

Who was the Dark Lady of Shakespeare’s sonnets? For poet Caroline Randall Williams, she is a black woman, the muse who inspired the Bard to write “Then will I swear beauty herself is black.” It’s the idea that inspired poet Williams to write her book Lucy Negro, Redux—and inspired Nashville Ballet Artistic Director Paul Vasterling to create a ballet. The enchantment of the story is further enhanced by an entrancing score performed live by MacArthur Genius Grant recipient, composer Rhiannon Giddens. Experience a critically acclaimed new work that defies categorization: “a beautifully choreographed ballet, but it was more than a ballet: It was also a spoken-word incantation and a showcase for the musical genius of Rhiannon Giddens. It was a love story, but it was more than a love story: It was also a forceful and pointed claiming of female desire — for authority, for sovereignty, for sexual self-determination” (The New York Times).