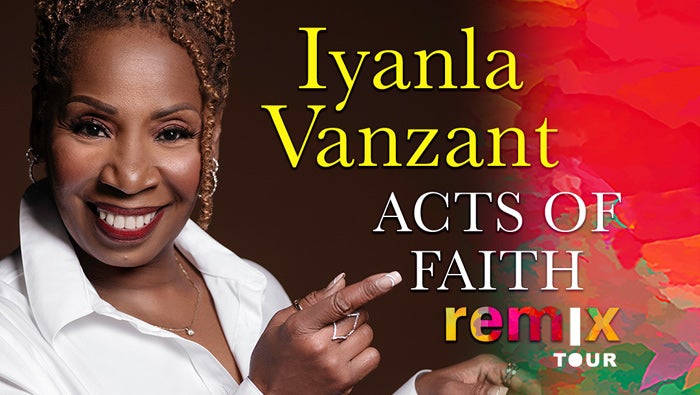 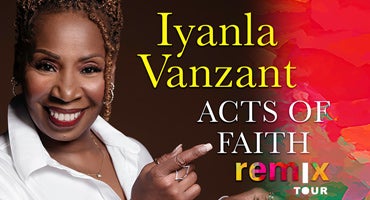 Fresh from the success of her 2018 Get Over It! Tour, Iyanla returns to the stage in 2019 with the Acts of Faith Remix Tour, a landmark inspirational and interactive event celebrating the 25th anniversary updated release of this internationally acclaimed best-selling book.

The encouragement, inspiration and faith-building wisdom found within the “little purple book” goes from page to stage as Iyanla, with her signature straight-talk, love and humor, gifts her diverse audience with the healing of their hearts, the empowerment of their minds, and the stirring of their souls. This national tour will travel to thirty-plus cities to bring the beloved thought leader up-close and in-person to her dedicated fans.

Best known for her eponymous hit talk show, best-selling books and audios, and her numerous appearances on The Oprah Winfrey Show, Iyanla is the host and executive producer of “Iyanla: Fix My Life,” the number one unscripted show on OWN: Oprah Winfrey Network (#1 original series on all of TV broadcast and cable among African American Women 25-54 and Women 18+).

“People often ask me — what is faith?” says Iyanla. “Faith is not believing, trying, or hoping. Faith is the internal knowing that motivates you to act! Faith produces doers who are obedient to their inner voice. Faith builds the endurance we need to face life’s trials. Today, it’s not enough to read and reflect. That’s why I’m doing the Acts of Faith Remix Tour to challenge us to go forth and become ‘faith-in-action’ world-changers.”

Acts of Faith: Daily Meditations for People of Color is published by Simon & Schuster and is available for purchase at all booksellers.

About Iyanla Vanzant
Iyanla Vanzant is the host and executive producer of OWN’s acclaimed and award-winning series, “Iyanla: Fix My Life.” She is one of the country’s most celebrated writers, public speakers, and among the most influential, socially engaged, and acclaimed spiritual life coaches of our time. Dedicated to facilitating the growth and evolution of human consciousness, Iyanla’s body of work spans over three decades and includes 18 published books, 6 New York Times best-sellers (translated into 23 languages and with sales exceeding twelve million copies), CDs, television, radio and stage performances. Her most recent book, the 25th anniversary edition of Acts of Faith is a celebrated international classic. When not writing or appearing on television, Iyanla lectures and facilitates workshops nationally and internationally. With her no-nonsense approach and underlying message of, “live better by loving yourself,” Iyanla has ignited a universal flame of personal transformation.