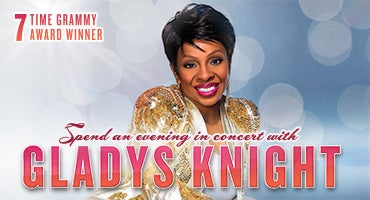 The great ones endure, and Gladys Knight has long been one of the greatest. Very few singers over the last fifty years have matched her unassailable artistry. This seven-time Grammy winner has enjoyed #1 hits in Pop, Gospel, R&B and Adult Contemporary, and has triumphed in film, television and live performance.

In her first effort since 2013’s “Another Journey” – Knight’s 8th solo effort – this summer marked the release of “Where My Heart Belongs”, a new inspiration gospel album. Knight is a two-time Grammy winner in the gospel category, and “Where My Heart Belongs” dropped on September 9th from Deseret Book, and recently won an NAACP Image Award for “Outstanding Gospel Album.”

All told, Knight has recorded more than 38 albums over the years, including four solo albums during the past decade: “Good Woman” (1991); “Just for You” (1994); the inspirational “Many Different Roads” (1999); and “At Last” (2001). “At Last” showed the world that she still has what it takes to record a hit album, employing the talents of contemporary producers like Randy Jackson, Gary Brown and James D.C. Williams III, Jon John, Jamey Jaz, Keith Thomas, Tom Dowd and Tiger Roberts.

A humanitarian and philanthropist, Knight has devoted to various worthy causes, including the American Diabetes Association – for which she is a national spokesperson, the American Cancer Society, the Minority AIDS Project, amFAR and Crisis Intervention, and The Boys and Girls Club. She has been honored by numerous organizations as well, including the NAACP Legal Defense Fund, Congress of Racial Equality (CORE), B’Nai Brith, and is a recent recipient of BET’s Lifetime Achievement Award.