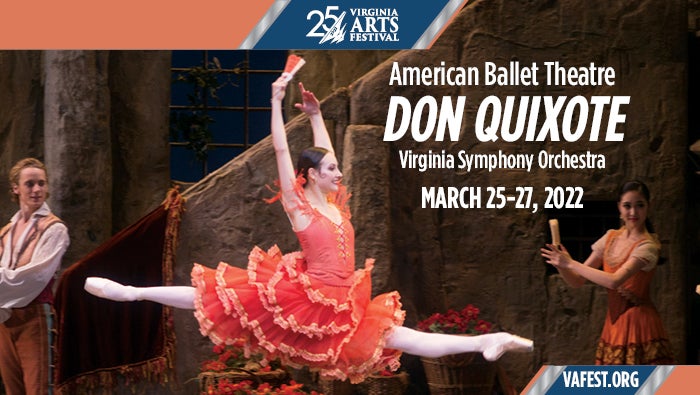 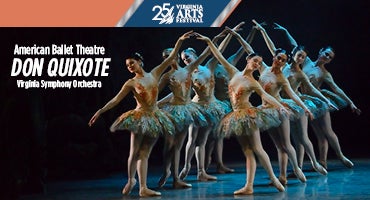 The Virginia Arts Festival presents American Ballet Theatre: Don Quixote performances are requiring all patrons to wear a mask while inside the venue, regardless of vaccination status.

“Here is a ballet with a coherent story, a colorful cast of characters, a score that throws off one irresistible tune after another. Dancers spill out onto the stage. The audience, me included, was crazy about them. By the time it was all over, everyone was happy…. It’s a great show.”

It’s one of the most beloved full-length works in the ballet repertoire—and an irresistible potion for instant happiness! Based on Miguel de Cervantes’ sweeping tale of romance and chivalry, this classic ballet features the misadventures of the knight-errant of la Mancha and his devoted squire, Sancho Panza. From the bravura dancing of the fiery toreador Espada to the colorful caravan of gypsies, the stage explodes with one show-stopping performance after another in this feast of choreographic fireworks.

The tale of Don Quixote has appeared again and again in Western Culture, from the 1869 ballet to the 1965 Broadway musical Man of La Mancha, and dozens of film versions of the story including a 1972 film adaptation of the musical starring Peter O’Toole, Sophia Loren and James Coco.

Ludwig Minkus’s score for the ballet is bursting with bravura flourishes, high-kicking music that simply begs to be danced to—and audiences will experience the rare opportunity to hear it performed live, as the full Virginia Symphony Orchestra accompanies the ballet in the pit. Originally created by the great choreographer Marius Petipa for Russia’s Bolshoi Ballet in 1869, ABT’s production of Don Quixote was staged by Artistic Director Kevin Mackenzie and features gorgeous costumes and sets by Tony Award-winning designer Santo Loquasto (Hello, Dolly!) and lighting by Tony Award winner Natasha Katz (Disney’s Aida, An American in Paris).

Three performances including a Sunday matinee—don’t miss your chance to share this impossible dream of a show with your friends and family!