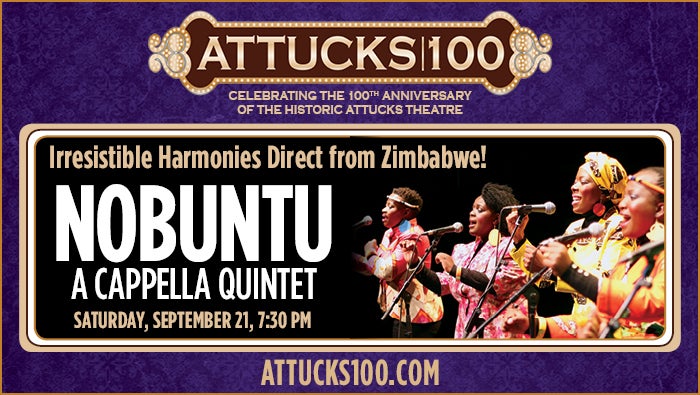 "Rich voices and exhilarating rhythms, both physical and vocal poured out from the stage to enchant a near-capacity crowd. [An] eruption of cross-cultural joy."
- Sarasota Herald-Tribune

"Joy seems central to Nobuntu's existence: it's present in their glorious singing, their expressive dancing, even in their dress — plaids, stripes, florals in colors as exuberant as their vocals."
​​- Tampa Bay Creative Loafing

Irresistible harmonies and beguiling rhythms mark the joyful performances of this female a cappella quintet from Zimbabwe. Nobuntu has drawn international acclaim in repertoire that ranges from traditional Zimbabwean songs to jazz to gospel, their pure and powerful voices backed by percussion, traditional instruments such as the Mbira (thumb piano) and organic, authentic dance movements.

The word Nobuntu is an African concept that values humbleness, love, unity and family from a woman's perspective. The ensemble represents a new generation of young African women singers who celebrate and preserve their culture, beauty, and heritage through art; their mission is informed by the belief that music can be an important vehicle for change, one that transcends racial, tribal, religious, gender, and economic boundaries.

Nobuntu has performed at festivals and concert halls throughout Europe and the African continent, and was a huge success at the TransVocale Festival in Frankfurt and the Voice Mania festival in Vienna; now you can hear them live at the historic Attucks Theatre as part of the Attucks at 100 celebration!