Architect Harvey N. Johnson was only 25 years old when he was given the project of designing and overseeing the construction of the Attucks Theatre. Johnson was well known in the community, and designed numerous houses for prosperous African American families, as well as 12 churches. A man of strong faith, Harvey Johnson studied theology at Virginia Union University from 1920 to 1924 and was a beloved minister for many years, most notably at Portsmouth’s Ebenezer Baptist Church, where he served from 1931 to 1973. 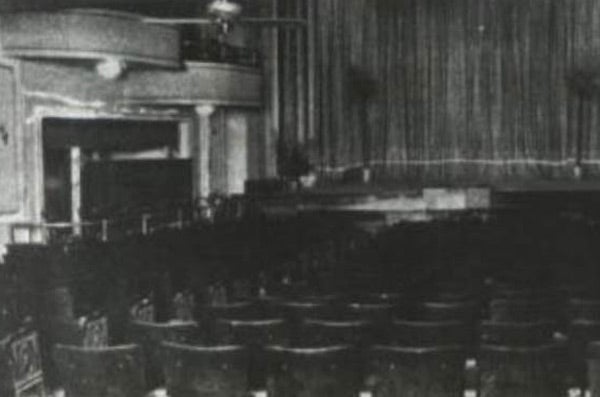 The Attucks’ founders proudly named the new building for Crispus Attucks, the first casualty of the American Revolution, a man of African and Native American descent who was killed in the Boston Massacre of 1770. This historic event is depicted in a painting on the theatre’s fire curtain, which was designed for the theatre by the Lee Lash Studios of New York, one of the era’s best known designers and fabricators of theatre curtains and back drops. Meticulously restored, the curtain is still today suspended from the stage’s proscenium.

The fire curtain wasn’t the only original aspect of the theatre to be saved. Ornamental plaster around the stage, a wood guardrail at the third-floor gallery, several original doors and chandeliers, and a gorgeous stained-glass skylight have all been restored to their original beauty. Also preserved from the original theatre are artifacts that have come to be known as the “glowing-eyed angels.” These plaster light fixtures above the box seats were state-of-the-art when the theatre opened in 1919. Back then, electricity was still considered innovative, so to show off the theatre’s cutting-edge technology, exposed bulbs illuminated the angels’ eyes. The angels are now back in their proper places, overseeing the box seats.

Soon after demolition work began in 2002, the construction superintendent ran across something in the rafters he never expected to find: a mama cat and her litter of five kittens. The first kitten was found on Valentine’s Day, so the foreman named her Valentina, fed her from a bottle for a few weeks, and then took her home. The remaining kittens and their mother were rescued from the building in March and given to the SPCA; within weeks, all were adopted by local cat lovers.

Under the stage in the theatre’s original dressing rooms, performers used to decorate the walls with graffiti and their signatures. Much of this has been preserved, including Dizzy Gillespie’s signature, and is displayed in lighted cases on second floor, along with original sheet music found in the theatre.

Today, total seating capacity in the Attucks is 624: the orchestra level holds 359; the balcony, 251; and there are 24 box seats. A 9,000-square-foot, three-story addition to the original building, added during the 2004 renovation, now accommodates a green room, dressing rooms, two meeting rooms, and a mechanical room.